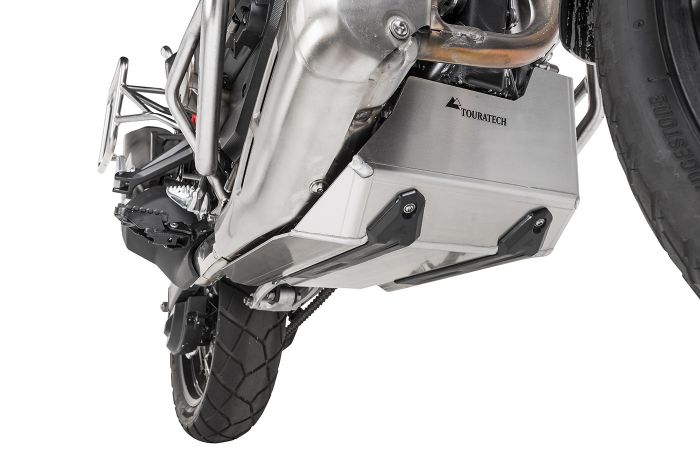 Skip to the beginning of the images gallery
Detalii
In creating the Honda CRF1000L, the developers at Honda have produced a motorbike that practically invites you to take it on an off-road excursion. Our development team was able to make a number of further improvements to its positive off-road characteristics. This engine guard is an absolute revolution!

Touratech has attached great importance to its robustness and functionality. Serious damage, such as holes in the engine block, can be effectively prevented by fitting the large Touratech engine guard.

Maximum strength is provided by multiple folded ridges in the 4 mm thick aluminium base plate, while an additional lower stainless steel attachment plate on the engine ensures the force of an impact is distributed over a large area via 6 bolting points. Ground clearance is not restricted by these two base plates. Another benefit is that the front of the engine guard rises up far enough to prevent damage to the oil filter and oil cooler as well. Plastic rails on the lower part of the base plate ensure that the bolt heads - which are already sunken - are completely covered. Not least, the plastic rails facilitate ”sliding” the bike over rocks, stones and tree stumps. Almost as an afterthought, they also prevent dirt buid-up. To sum up, the large Touratech engine guard for the Honda CRF1100L is a product that meets the most demanding requirements as well as being an absolute visual highlight!
Mai multe informatii
Descărcări
Produse conexe
Atunci când produsul curent este adăugat în coșul de cumpărături, sunt adăugate și articolele selectate -
Touratech Copyright © 2021